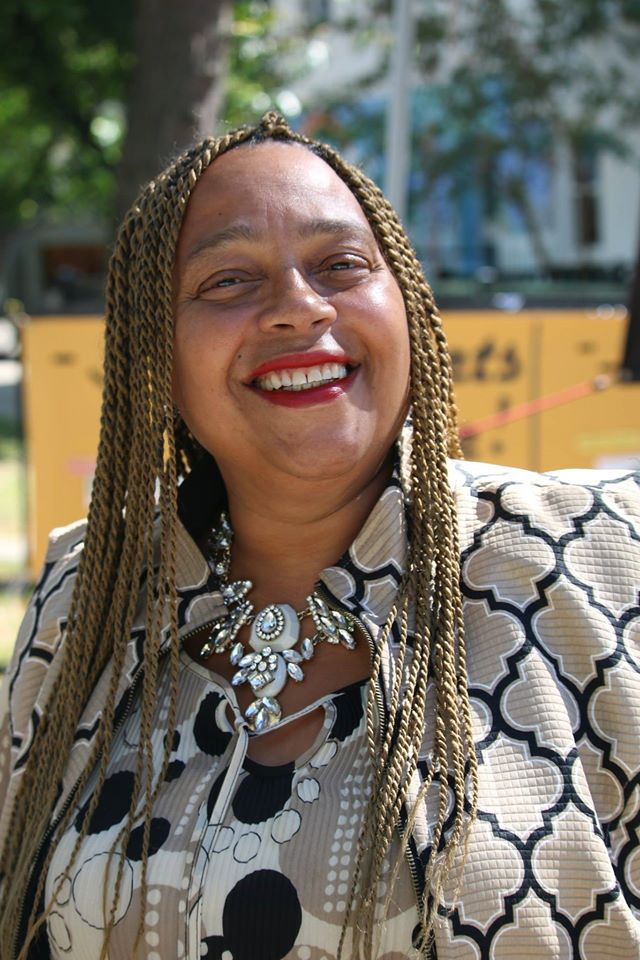 by Yana Makuwa and Katie O’Brien

Phoebe Brown is a prolific activist and organizer in the Ithaca community. She is involved with many local nonprofits and justice movements, including the local chapter of #BlackLivesMatter, the Multicultural Resource Center at the Cornell Cooperative Extension, the Cayuga Medical Center, Greenstar Community Projects, TC Food Policy Council, and Ban-the-Box. Last year, Phoebe Brown ran for mayor as a write-in candidate to start a conversation around community needs that she felt were not being discussed enough, like affordable housing.

kitsch: Could you introduce yourself and talk about the work that you do, and why #BlackLivesMatter events are so important in Ithaca in particular?

Brown: For one, I’m Phoebe Brown, I work at the CCE with Multicultural Resource Center. I’m the mentor coordinator for the Ultimate Re-Entry Program. I’m involved in many different organizations in the community to address equity and inclusion for people of color. Why do I think it’s important? Because black people live here. And why do I think it’s important for me to involved? Because I’m an Africa American woman, who feels like that’s my job. At one time in my life I dropped the ball; I’m a recovering person, and I missed out in being available for the generations under me for some years. So I feel it’s my duty to work for equity and inclusion because I live in Ithaca, but also because what’s been happening is happening around the world for people of color. And it’s important to me to be a part of the solution; I try to be a part of as many different organizations that are a part of the community. A lot of them I don’t remember until the day I’m supposed to be at the meeting. [laughs].

kitsch: What advice would you give then to people who also want to be part of the solution or who want to be allies to different justice movements when they’re part of the dominant group that’s responsible for some of the problems?

Brown: We’re all responsible for the problems; but I think the first thing to do is build relationships. Build relationships and get to know people, and get rid of some of the assumptions and judgments that we have all been inundated with, from what our system has taught us and brainwashed us with, to learn the truth. And the only way you can learn truth is through conversations and building relationships. If there’s a community you want to work with, it’s not about going into that community to be a rescuer or savior. Go into those communities asking, “How can I help?” Or go into those communities and build relationships and you won’t have to ask, it will be told to you.

You know, I think what happens a lot for everybody is that we have a lot of assumptions. And I do too, everybody does. But we won’t know what we don’t know until we find out from the people who are living those social issues that we say we want to change. That’s the best advice that I can give; understand what your privilege as the dominant race can do. Open doors, look around when you’re in a space and see who’s there, and see who’s not there. And make an effort to make sure that who you believe should be at the table is there, and whose tables you should be at, you go.

That’s how I believe it, I’ve seen it work, and I’ve been around for a pretty long time. [laughs]. And not only have I seen it work, I’ve seen it not work and I’ve been confused as to why—I’m always learning too. Always be patient, always be willing to go deeper and look inside and ask, “Why am I doing what I’m doing?” Because we do what we do not only for the moral part of it, we do what we do because it’s going to be best for everyone.

kitsch: We know you ran for mayor in the fall to draw attention to some of the under-discussed issues facing the Ithaca community. And that speaks to what you were just saying about building relationships and starting conversations and understanding people’s needs. So what are some of those issues you see, what do you think the city of Ithaca needs from the mayoral office?

Brown: We have a lot of things we need. For me, I think there’s this notion that we live in a place where things are pretty good. We live in a world where things are pretty good, but we’re a small microcosm of everything that’s going on in the world. It looks good, but underneath there is a lot that’s going on. The biggest is our housing problem here in Ithaca, and people aren’t talking about it very much. Gentrification is starting to push families to the outskirts. And the problems that come along with that are lack of transportation, and lack of employment because you can’t get to work. We need to figure out a way to make transportation work for everyone. Another issue is food justice; how do we talk about food justice in a way that it’s not about finding ways to help people plant and grow, but how do we find ways that people can have the ability to shop where they want to buy, buy what’s healthy to them? These issues are all near and dear to my heart. A lot of the problems at the end of the day go back to systemic stuff, systemic oppression. How do we get people who are grassroots and who have a voice in their communities to feel that they have a voice, and how do we get people to stop thinking that they don’t?

I did the whole major thing to energize and light the fire under others, so they could see, “Look at her, look where she came from.” I came from a dark place at one time, I didn’t think I had a voice, I didn’t think that what I had to say was important. But I stepped up and I ran against a mayor that many people love in this community, because I felt the democratic thing is for him to have somebody run against him.

kitsch: That makes a lot of sense, it helps push the system, and avoid complacency. So a hot-button issue right now that we thought it’d be interesting to get your perspective about, is the proposed heroin injection sites?

Brown: Some things work for some people, and that might be something some people need. However, my mind goes more to prevention, so that we don’t need those kinds of houses, so that they will go out of business if we do have them. But we also do not have a detox center in Ithaca, at all. So my vision would be to see a detox center with counseling here in Ithaca; a safe house for people who are ready to get clean, I’m a recovering person, so I know there have been moments when I’m ready to get clean, but I can’t get into to a detox center, I can’t get into a safe place. But if there’s a place I can go to at that present time, that would help me right then, would be good. And that is something that I heard would be available in the safe I house. So the injection sites are not something that would be my number one choice, but I do understand that what might work for me, might not work for someone else who is recovering. But first and foremost is making sure that money goes into prevention. Making sure schools have studies about addiction, and are talking about addiction. Making sure we’re asking, why is it at peak again? There’s some studies about what happens to people in desperation. Because it’s been happening now in white communities, it’s shaking up this whole addiction conversation.

kitsch: And then so a last question to wrap up: As I mentioned, this is a student magazine, so I was wondering how you see the role of student communities in Ithaca in terms of activism? I think there’s a tendency for the community to kind of split in two.

Brown: I still believe the same thing about building communities and communication. We have a lot of different communities in Ithaca that commute to find out and meet each other’s needs. I also think that there are a lot of things that are happening in both communities that are good; we need to find out what they are. Also, the most important thing for me for about students is that students have led most of the movements. Once they get a whiff of, ‘this is what we want, this is what we need to do,’ the changes start to happen. I know in my lifetime I’ve seen that college students make the loudest noise. And they make the noise when we need the noise. So I just encourage the students to make it happen; that they’re responsibility is to the generations behind them. And that is what to do, and that comes from little old me, trying to figure it out still as I live.

kitsch: Thanks so much for taking the time to speak with us! This has been so helpful. Is there anything else you’d like to add?

Brown: My only thing is, movements are like the clock. And they all move together. We’ve got a lot of movements going on right now—we really have to support each other in the different movements. So that’s why I’m involved in as many as I am, at a late age in my life. I’m trying to let y’all know early [laughs].