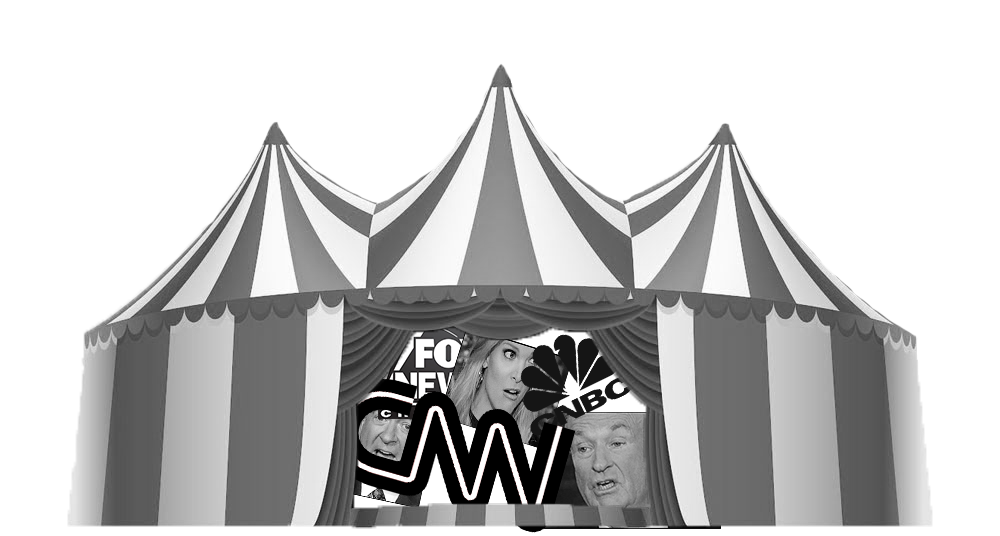 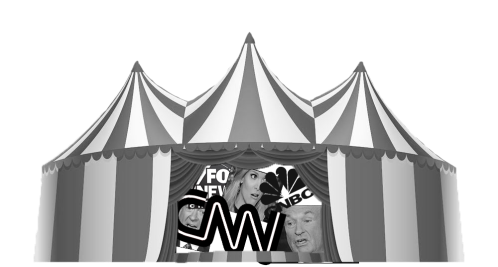 The stage. The bright lights. The crowds that conduct themselves like they’re, according to Bret Baier, “somewhere between a library and a Red Wings game.” These elements of the debates seem to call for an introduction like “This season, on the Presidential Race!” After all, the news media has decided that the American people find entertaining reality TV more compelling than serious discussions of economic and foreign policy.

From the very beginning of primary season, media outlets set a comical precedent complete with click-bait article titles to mark the most memorable debate moments: “Christie Fillets ‘Scripted Rubio” from Talking Points Memo; “Donald Trump defends size of his penis” from CNN Politics; “Hillary Clinton Takes Jab at Bernie Sanders’s ‘Shouting’ Remark” from The New York Times. Like Bernie Sanders after hearing yet another question about Hillary Clinton’s emails, we’re all sick and tired of being fed these headlines and shown ridiculous scenarios that leave no room for understanding actual issues beyond vague foreign affairs tactics and incomplete taxation solutions.

During the first televised debate, which occurred between Kennedy and Nixon, each candidate’s appearance affected voters’ preferences more than what each was actually saying. The story goes that people who heard the debates on the radio thought Nixon won, but those who watched it on TV thought the winner was Kennedy. If you look at footage of this debate, it’s not difficult to see why. Nixon’s shifty-eyed, sweaty-browed manner made him look like someone you couldn’t trust (ahem Watergate), while Kennedy looked tanned, charming, and spoke directly into the camera. For better or for worse, televised debates have been important since they began in 1960, and since then they have had the power to influence the outcome of elections. And making sure these debates are a success is the lofty responsibility of the media.

In spite of this, somehow the media let this year’s primary debates crumble into disarray. Why are the debates allowed to fall so low on the scale of political seriousness? The first time a clown show of a debate occurred, did media outlets and campaign runners realize that this is what would get America, a nation that idolizes reality TV stars and craves outlandish spectacles, more interested in the presidential race? CNN certainly did, and immediately proceeded to capitalize on the newfound interest in political television. 30 second primtime ads on CNN normally cost $5000, but for their September Primary Debate, they were able to charge as much as $200,000. The prices are now comparable to those of top entertainment TV shows, to match the prime time viewing numbers. Media networks are not immune to corporate motivations, nor should we expect them to be. However, it’s very concerning when the journalistic integrity involved with presenting platforms that will change the fate of the nation is compromised in favor of attracting more viewers, more fame, and more money. Any attempts to make the debates more substantive are likely to decrease viewership and sponsors—and even a small loss is unacceptable in the eyes of media corporations.

Televised political debates have not always been such a circus. The first of the Bush and Gore debates, held on October 3, 2000, was attended by a small audience that did not participate, and clapped only as the candidates were welcomed onstage. The other two had larger audiences, but the media coverage focused on footage of only the candidates and the moderator, seated at a table and having a discussion. Political science professor Keena Lipsitz argues that this intimate, conversational method is proven to be more effective in conveying information actually related to the positions of each candidate (supposedly the most important factor in choosing whom to vote for). Every trace of this intimacy vanishes when you have more than five candidates on a stage with an audience of between 10,000 and 20,000 people who are ready to laugh or applaud at a moment’s notice.

While debates in the past perhaps have not been as spectacularly frivolous as these, this outcome has been a long time in the making. In a world of politicians, presentation is extremely important, and often warped to appeal to the masses. This year, a disillusionment with the robotic, collected, says-all-the-right-things politician has led many Americans to appreciate the “tell it like it is” speech that candidates such as Donald Trump and, to an extent, Bernie Sanders offer. But this type of rhetoric is really just another costume for half-truths and plans just convoluted and unsubstantial enough that listeners won’t be able to ask concrete questions. The debates are supposed to help us go beyond appearances and reveal the sense or nonsense behind this politics-speak, but this year the media has succumbed and let the ridiculous personas and fired-up audience run rampant.

Reforms are necessary to prevent the escalation of presidential debates to the point of complete banality. To start, we could ask more of the moderators. Irresponsible moderation of the debates by celebrity journalists allows for incredible discord. Candidates speak past their time and talk over each other. Some don’t get enough time to talk at all (a running joke about Kasich that unfortunately hides how indicative it is of a broken system). It all becomes a farce and people find it amusing. Short of actually turning off the candidates’ microphones, it is important that moderators be firm in enforcing speaker time limits and shutting down tirades against other people on the stage. Beyond that, the questions that moderators ask often only fuel the drama, and frequently make the journalists part of spectacle. For example, Bernie Sanders chastised Anderson Cooper after he asked Hillary Clinton a question about the email scandal, saying “The American people are sick and tired of hearing about your damn emails!” And at the Republican debate hosted by CNBC, the moderators were booed for questions that pitted candidates against one another based on thinly veiled morality questions. John Harwood asked Mike Huckabee if Donald Trump had the “moral authority to unite the country,” and even Ted Cruz could tell that the questions were playing into making the debate “a cage match,” asking “How about talking about substantive issues people care about?”

But the candidates are not without blame either. Another major problem in debates is candidates making false assertions with reckless abandon. Fact-checking in real time would make the candidates less likely to spout whatever numbers pop into their head in attempt to wield statistics as their weapon of choice, under the assumption that no one can argue with concrete numbers. I doubt many American people take the time mid-debate to check how much Hillary Clinton has really received in donations, or if Trump’s budget for the wall is at all feasible—and should they even have to? Megyn Kelly’s tactic of consistently calling out Trump proved effective in shutting up a stream of lies that, after another candidate’s rebuttal, could have otherwise been seen by viewers as case of he-said, he-said. We should be able to look to the networks presenting the debates to ensure that the content of the candidates’ statements are more or less accurate, and to call attention to moments when they aren’t. A newspaper article can’t quote someone who is flat-out wrong without reporting the truth in the next sentence, and televised debates should be held to the same standards.

Back to Lipsitz’s point: make the debates more conversational. That would put an end to this pattern of candidates attacking the person and not the argument, and the resulting empty exchanges that take time away from substantial issues. But these are the clips that stick in  the public memory—not the thought-out pleas for health care reform, nor the discussions of the incredible wealth gap in this country, but the biting comment directed at any person on the stage and the ensuing crowd noises. This high level of unprofessionalism is exacerbated by the symbolically lofty position given to the candidates. From the stage, the high number of candidates fighting for time to talk, the distance from the audience and moderator, the spotlights—it’s more like watching actors entertain than watching national leaders discuss the country’s issues. Encouraging a conversation where fewer candidates are debating and the moderator can ask questions on a level field would make substantial answers more likely. Another reason to switch to a more conversational debate style is to eliminate audience sound effects. As it stands, we are more likely to remember which candidate the audience cheered or booed more than what the candidate actually said. Factually, a person is more likely to take their peers’ opinions into account than those of a corporation or of the candidates themselves, which also accounts for the effectiveness of poll results on voters. In the current structure, the debates are essentially popularity contests, as emphasized by Trump’s constant cries to look at the polls; ignore the facts, look at the polls.

Whether it’s on E! or CNN, it can’t be denied that creating a spectacle is a tactic that works. But why do the major broadcast media outlets even control the debates in the first place? Networks like Fox, CNN, and MSNBC are well-known for blending news reporting with whatever commentary they think will pull the largest audience, which may make for more interesting programming but not for more informative debates. The media’s complete control of these debates takes away a disproportionate amount of power from voters. The debates shouldn’t be for-profit endeavors that reduce the candidates into stable caricatures of themselves. Voters should have the right to observe candidates’ demeanors and platforms in a more or less sterile environment, and use that information to make informed decisions about the person they believe should run their country. This isn’t possible when the companies running the debates benefit from creating a circus sideshow.

It is, of course, not easy to re-imagine a system that’s been in place since the 60s, but hasn’t 2016 proven it’s time to try? It may just be a matter of removing the studio audience and moving all the debates from primetime on CNN to midafternoon on CSPAN. That may mean that fewer people would tune in, but these debates haven’t really revealed that much about the candidates’ platforms anyway. The problem is that the news outlets have a sweet deal with the debates as they stand, and getting them to relinquish that power may be impossible, even if it’s for the good of the country.